Ashanti Akim Community Organisation is focused on alleviating poverty in Ghana’s Ashanti Akim region, which is located about four hours drive northwest of Accra, Ghana’s capital, and an hour and a half east of Kumasi, Ghana’s second largest city. AACO addresses poverty by focusing on projects in five key areas: education, agriculture, business, medicine and leadership development with community at the heart of all of this.

Seeking to help grow a vibrant community in Ashanti Akim in which the best and brightest are inspired to stay and contribute to the community’s growth instead of seeking jobs in larger cities, AACO’s largest project to date is the Jubilee Mission Senior High School – Dampong, which opened in 2007 and is still expanding and developing. Many of AACO’s other projects link back to this school, which sits on the 32 acre site that serves as the base for AACO in the community. All projects seek to address core causes of poverty and provide sustainable change for the people of Ashanti Akim.

Ashanti Akim is composed of 226 towns and villages, with a total population of 95,000. The mostly-rural region has 92 primary schools, 55 junior high schools, but only seven senior high schools in the southern region, including Jubilee Mission Senior High School, where students aged 15-19 can continue their education.

Founded by Akosua Arkhurst, a daughter of the region who now lives in London where AACO has built a base of partners invested in poverty alleviation in Ashanti Akim, AACO works to equip the people of the region to take ownership of their own development. AACO’s work was launched when Akosua, sensing a call to help the people of her homeland, returned in 1989 to ask local leaders what the community needed. AACO’s work continues to be a response to the answers to those questions and to an ongoing conversation with residents about their most pressing needs.

At first the work was primarily facilitated through churches in Ashanti Akim and supported by The Word Church in London. The Word Church continues to be AACO’s main sponsor and serve as its backbone, but as AACO became more deeply rooted in the Ashanti Akim community and more familiar with its needs, it added education-focused projects. These projects began with collecting used books, clothes and shoes for Ashanti Akim’s young people and progressed to sponsoring children for their school fees, school supplies and uniforms.

AACO has also helped rehabilitate school buildings, adding a concrete floor, plastering walls and building a classroom for one school. AACO helped move the school in Ananekrom, a remote farming community in the Afram plains, to a new site and used funding from World Mandate Ministries in Northampton to build the school’s block of junior high classrooms. World Vision added a primary school to the site, and now the Ananekrom school serves more than 400 students whose families live in the bush.

Another of AACO’s early projects funded by World Mandate Ministries contributed toward an IMF-supported water project in Dampong, which continues to provide clean water to the community. 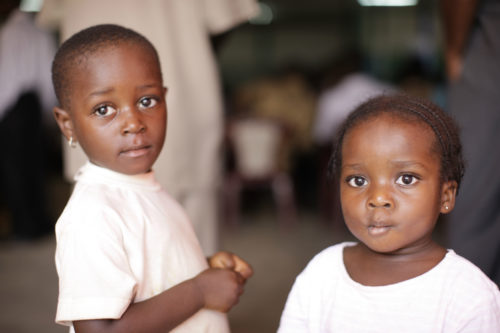 Service teams have been travelling to Ghana with AACO since 2000 and this became a clearly defined part of AACO’s activities in 2003. Since then other partner organisations like The Charter School have been regularly organising teams that travel to Ashanti Akim to help with AACO’s projects and to build relationships with the people they are assisting.

In 2003, the village of Dampong gave AACO 32 acres of land on which to serve the needs of the community including building the Jubille Mission Senior High School. In 2004, Spring Harvest, provided the initial grant of £26,000 to build school facilities for Jubilee Mission Senior High School, which opened and welcomed its first 40 students in 2007. The high school continues to be AACO’s biggest, most visible project.  Read more about the school here.

Navigating the challenges of working in Ashanti Akim over the years has taught AACO much, and that knowledge plus the organisation’s continued trusted presence in the region has positioned it to make a greater difference than ever.

Yet, very real challenges remain as AACO works in Ashanti Akim. Finding sources of funding for waiting projects that will improve development capacity in Ashanti Akim is an ongoing challenge.